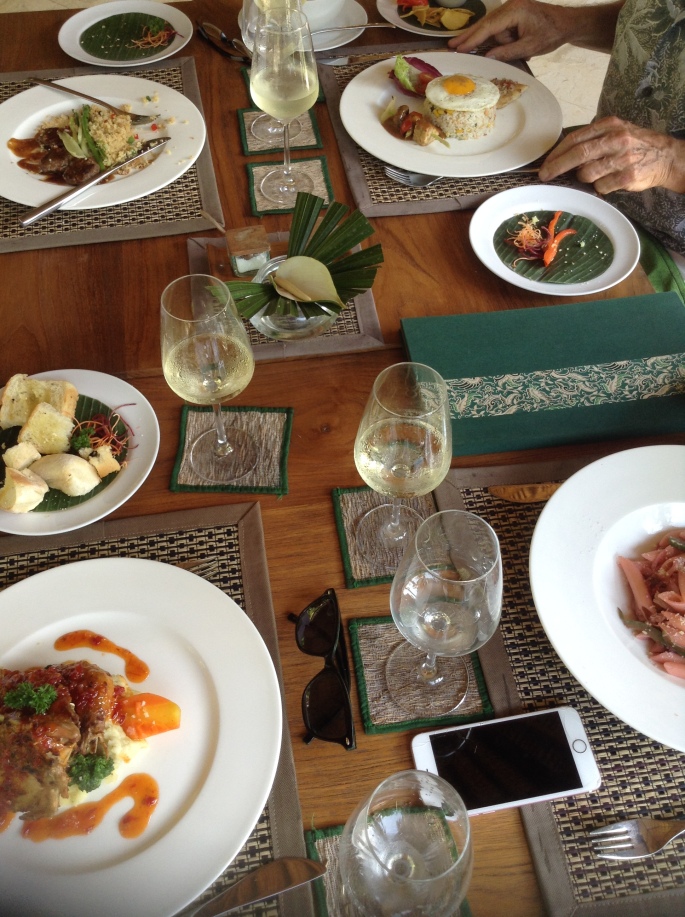 The Balinese are the most accommodating people on earth and a group of young men stand at the door to welcome us into the Royal Pita Maha, a spectacular hotel sitting high above a bend in the Ayung River. The four of us walk through the grand open reception area, past statues of Hindu gods and down a lift to start our journey to the river for lunch at their organic restaurant. Michael and Geoffrey are expatriate Australians who have retired to Bali, and to thank them for their generosity my friend and I are taking them for lunch.  Despite two lifts, there are still many flights of uneven stairs, paths that wind around villas flanked by ponds full of large carp and goldfish, which swim along next to us, mouths wide open hoping for food. We walk past a sacred pool, which is not for menstruating women, to reach our pavilion by the river.

The pavilion is set up just for our group and overlooks a set of rapids where a constant caravan of rafting tourists swing around the corner, get pushed onto the rocks and flail around helplessly until their hard working Balinese helmsman gets them off and heads them in the right way. Those that manage the rapids seamlessly often give us a jaunty wave of pride before disappearing around the corner.

The menu is western and the service Balinese. Bali is not an island for wine connoisseurs and the choice always limited. After some toing and froing with the waiter it became clear there was only one lone bottle of white wine and it was a chardonnay and that would be fine, thank you very much. The menu read like a modern western menu – seared tuna, organic greens, pastas and organic chicken. For entree, I ordered a roasted zucchini, lentil and fennel salad. What turned up was a salad with cos lettuce, shredded carrot, beetroot and fennel but it was all freshly prepared and prettily piled up on the plate.

The mains were not so successful. I had a marinated chicken in a sweet chilli sauce on mash, and like much of the local poultry, it was stringy and dry. I managed to separate some meat from the bone and to make a meal from it. Geoffrey’s was less successful. He asked for the lamb rump, medium rare. What came were three hard, little buttons of meat which he quickly pushed away and declared inedible. The concern by our waiter was heartbreaking, but Geoffrey was firm that he did not want another dish and instead he put his energy into coercing the waiter to find another bottle of wine. Again, after more toing and froing, he came back with a bottle of sauvignon blanc, which had the distinct perfume of a men’s urinal. The rest of us declined the privilege to have a glass and  left that particular pleasure to Geoffrey.

Michael, a former chef who had worked in restaurants in Ubud, explained the Balinese relationship with food. ‘The western menu is learnt by rote by the kitchen staff,’ he said. ‘So they cannot accommodate changes or special requests because this is not their food culture’.

‘For the Balinese, food is fuel. The mother cooks a large pot of something in the morning and it sits there all day and the family come and go and eat when they need to. They don’t sit down together to eat’.

Michael explained that what we get from sharing a meal – pleasure, companionship, social connection – they get from the temple. This is where they worship, not at the dinner table. I saw how alien our fetishisation of food must appear to the Balinese. Yet they are so accommodating to visitors. They learn to sear tuna and make organic salads and try and produce bottles of wine and watch us as we ooh and aah at the table and pick our way through course after course.

After lunch, we made our way slowly back up the hill, past the sacred pool and the carp ponds and up the uneven steps into the lift and out to the foyer. At the front door a group of young men, all in traditional sarongs, namasted us with beautiful smiles as if it had been such a pleasure to have our company at the hotel. The pleasure had been all ours.

Site Title
readingthealexandriaquartet
Seeing Me Out

A blog about life, film, ageing and resisting retirement.

The Art and Craft of Blogging

life in the fast lane

a year of cooking delicious things

writing for a better world